One of the discovery from medical studies is that the use of hydrolyzed formula can help prevent allergy. It is important to chose the formula with proven medical evidence.  By referring to the GINI study, the use of partially hydrolyzed formula Nan HA can prevent eczema if exclusive breast feeding cannot be done. The extensively hydrolyzed casein formula Nutramigen also has data showing that it can prevent eczema; but this special formula is primarily used for instances of cow milk allergy.

Click on the article below to enlarge it for better reading: 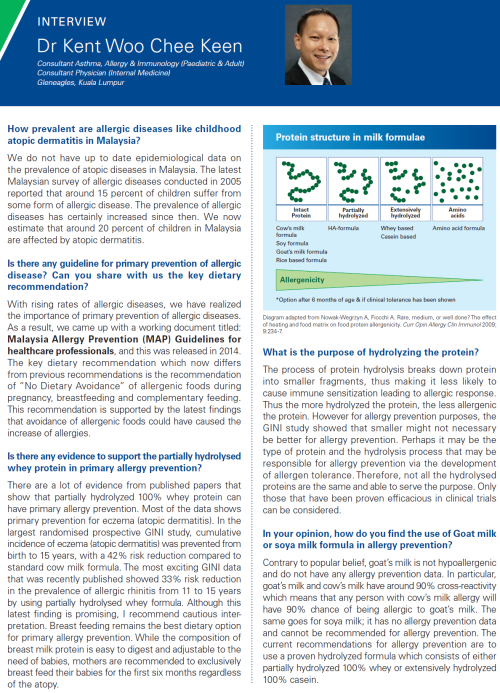 Comments Off on Prevention of Allergy 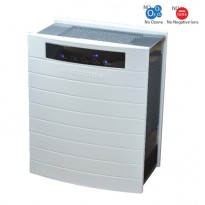 Air filters are useful in removing airborne allergens from the environment. When choosing an air filter, it is important to look at the clean air delivery rate or CADR. CADR measures the amount of air that can be effectively filtered. For example, if you buy a palm sized air filter, it will be unreasonable to expect it to filter the amount of air in your living room.

Another important point to mention is to be careful when buying air filters with ionizer features. The reason is that ionizers can produce ozone and inhaled ozone is not good for the respiratory airways. Please look at the article that was issued by consumer reports.  Article (click to download)

If you are looking to purchase an air filter or deciding on aeroallergen control measures, please see The Allergist for proper advice.

Homemaster does offer good products and if you are a patient of The Allergist, please mention it to them for discount.

Comments Off on Air filter

Prevention of allergy with probiotics

With the increasing prevalence of allergic diseases affecting the world, we should also focus on prevention strategies. One of the exciting frontiers of research is in the role of bacteria and how it affects our body’s immune function. We are only starting to understand the human microbiome and the role it plays in modulating our response to diseases and  influencing our metabolic and physiologic function.

Probiotics are defined as safe, helpful bacteria which can confer health benefits. Research is now looking into how probiotics can be used to prevent or modulate allergic diseases. 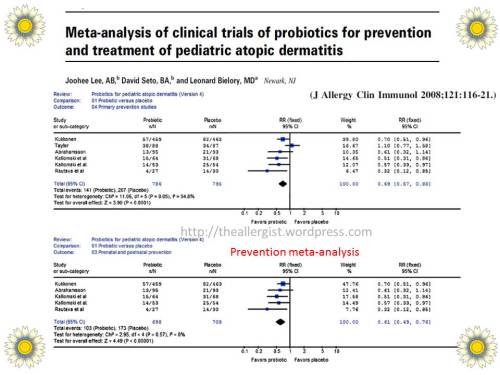 If you are interested in knowing more about probiotics and allergy, please do not hesitate to contact The Allergy Clinic

Comments Off on Prevention of allergy with probiotics

Below is a link to a New York Times article:

Can a Radical New Treatment Save Children with Severe Food Allergies?

For many years, there had been no available treatment for food allergies. The management for food allergies consists of proper evaluation by an Allergist to determine the food trigger and avoidance. Portable epinephrine (Epipen) was used for any reaction due to accidental ingestion of allergic foods.

Comments Off on Immunotherapy for food allergy

The most important medication to treat asthma is inhaled corticosteroids. Inhaled steroids reduce airway inflammation in asthma and reduce asthma exacerbations. It is the first line therapy for persistent asthma. It has been known that inhaled steroids can reduce adult attained height and the study published in NEJM suggests that height reduction is 1.2 cm in the inhaled steroid group compared to placebo. This is actually very encouraging data, given the effectiveness of inhaled steroids in controlling asthma and that the loss of height is only 1.2 cm should encourage physicians and parents on the safety of inhaled steroids.

Remember that uncontrolled asthma will also lead to worsened growth compared to children with controlled asthma on inhaled steroids. Asthma exacerbations can lead to even more potent systemic steroids that have to be used as rescue therapy.

Inhaling steroids stunts growth, but not much
Mon, Sep 03 07:00 AM EDT

CHICAGO (Reuters) – Adults who took inhaled steroids as children to control their asthma may be shorter than they otherwise would have been, but only by a little, U.S. researchers said on Monday.

Results of a long-term asthma study found that children who used an inhaled steroid before they entered puberty were about a half-inch shorter as adults than those who did not take the drugs.

Doctors have known since the 1990s that inhaled steroids taken for asthma can delay growth, but researchers had believed these children would eventually catch up.

“This is mostly good news,” said Dr. Gail Weinmann of National Heart, Lung, and Blood Institute, a part of the National Institutes of Health, which supported the study.

Weinmann said the drug has been proven over and over to be the most effective for the most people, but there had been this lingering question about its effect on height.

“Now we know what it is. It is a half an inch,” she said in a telephone interview.

The study, led by William Kelly of the University of New Mexico Health Sciences Center, is the first to follow inhaled steroid users until they reached their adult height.

Kelly and colleagues studied more than 1,000 children aged 5 to 12 who were treated for mild to moderate asthma as part of a comprehensive asthma study.

The researchers divided the children into three groups: one got twice-daily treatment with AstraZeneca’s Pulmicort, known generically as budesonide, an inhaled corticosteroid medication; a second group got nedocromil, an older inhaled non-steroid medication; and a third got a placebo.

The team followed nearly 950 of the children until they reached adult height. They found adults who took the inhaled steroids were slightly shorter than either of the two other groups.

Those most affected had started on steroids before they reached puberty, and the height effect varied depending on dose, with those taking higher daily doses experiencing the biggest effect on height.

“This suggests that finding the minimum dose required to control each child’s asthma could help mitigate any potential effects on height,” Kelly said in a statement.

The findings will be presented on Monday at the European Respiratory Society meeting in Vienna, and published online in the New England Journal of Medicine.

Comments Off on Inhaled steroids for asthma and growth concerns 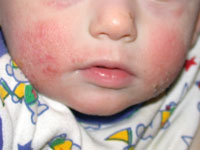 Bathing is an important part of Atopic Dermatitis care. Bathing can remove dirt, allergens and microbes from the skin. However, it is important to understand that bathing alone is not adequate. Bathing can actually dry out the skin by removing natural oils from the skin and cause the Atopic Dermatitis to flare. Also using harsh soaps, scented soaps and lotions during bathing can significantly irritate the skin and dry out the skin. 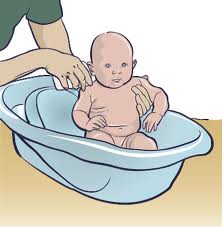 So it is very important to use mild unscented soaps for bathing such as Dove unscented beauty soap bar or gentle cleansers such as Aquaphor Gentle Wash, Aveeno Advanced Care Wash  and Cetaphil Gentle Cleansing Bar. After bathing, do not forget the lock in the moisture by applying appropriate barrier creams immediately onto the skin.

Comments Off on Atopic Dermatitis (Eczema) and Bathing

Immunotherapy is effective in:

Who can prescribe immunotherapy?

What forms of immunotherapy are there?

What is the difference between the two forms of immunotherapy? 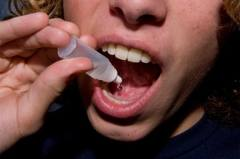 A qualified Allergy & Immunology specialist can help determine which form immunotherapy is appropriate for the patient.

Decision to begin immunotherapy will be based on several factors:

Comments Off on Treatment for allergies

The Allergist
Blog at WordPress.com.